I know I haven’t written about it, but I was very excited to see the Milky Way last time I went to try some star capturing photography and flabbergasted at capturing an image of it in seemingly so simple a fashion. Okay the clouds did cut the experience rather short but hey, I got something (as can be seen on my previous post). So you can imagine (perhaps) that when I discovered yesterday (my day off) that the forecast stated there was going to be a clear patch in the night sky between 11pm and 1am, I was determined to make the most of the opportunity.

I want to step back a bit here to acknowledge how truly frustrating taking pictures of stars in general but the Milky Way in particular is. There are many foes to dodge. There are the obvious ones like the weather and whether you can see the centre of our galaxy. Unfortunately it is during Summertime that the Milky Way is most prominent. Great you may think, you wont be freezing your extremities off. And you would be right, I do appreciate not getting frozen but the problem with summer is the length of the day. For astrophotography one needs at least two after sunset and two hours before sunrise for the background light to be removed, so we are looking at least five hours of darkness in order to get at most an hour of picture taking. Where I live tonight, full darkness starts at 23:10 and ends 03:25 tomorrow so it nice to be able to use earlier part of the night.

Okay, that’s not so bad surely, I could stay up late or I could set an alarm and pop into the back garden take a few snaps and climb back into a warm bed all before midnight. Unfortunately this is where light pollution comes into play. Most people have no idea how much light is scattered around at night. Now I am autistic and one of my differences is a sensitivity to light so in my case high contrast situations cause me physical pain. I naturally avoid putting lights on anyway so will happily wonder around my house without any lights on (though this can be unnerving to visitors because their imaginations leap to burglars). My camera is capable of capturing much more light than my eyes are so to cut a long story short, to take pictures of the Milky Way one needs to get as distant from people as possible (I am associating people with light here).

I am lucky in this respect though. I live in a small town at least twenty miles away from large conurbations and if I head in a north-westerly direction, I can easily get into the Scottish Highlands. My standard photography stop is 17 miles way as the crow flies and takes me about 40 minutes to drive there, but even here there will be a distinctive orange glow in the northern and southern directions due to the small towns. Humans are not the only light issue to be avoid, our good old moon produces enough reflective sunlight to turn night time photos into daylight ones. It is possible to take shots during the last quarter around a new moon but obviously the least background the light the better.

Last night looked good then. It is summer still but the days are short enough to ensure that total darkness will be achieved. The weather looked good, cloud was breaking up rapidly in the evening and visibility was over ten miles. A window of opportunity presented itself between 11pm and 1am where no high cloud was predicted, and where single digit percentage medium or low cloud might be present. There was no wind. The moon was 4% waxing and anyway was not in the sky. The last variable was where to go. I thought it was worth trying somewhere new, further away from light pollution and so went 32 miles away (in a straight line) which took about an hour to get to. I even tried to get a couple of hours napping in before the evening meal so as to have a bit more energy during the night time.

I left my house at twenty past ten and headed north. It was certainly clear at home. Finding a spot to park was tricky because although I had looked at the lane on Google Streetview, driving along a twisting road in the dark requires concentration. I missed my selected spot but found another parking space a bit further along. There were plenty of trees around which looked good for a Milky Way and tree silhouette photo. Having avoided any ditches, I parked and got out of the car. It was overcast and yes, my headtorch did catch that right, it started to rain. Well I’m a bit early, so I get back into the car, set an alarm and try to snooze a bit. Fifteen minutes later, it isn’t looking any better. Ten minutes later I get out of the car and examine the sky. Still plenty of cloud but signs of it be different on the horizon (which way are the clouds coming from?) and then I see a few stars. There is hope after all.

Whilst the cloud never truly goes, there seem to be large gaps forming and so I decide to take some photos, after all what else can I do? The camera reveals more cloud than I thought and everything is tinged with orange. What, that can’t be light pollution. How far does reflected street lights carry off clouds? I make the best of the situation. I even try painting with my torch during the 30 second exposures. It is half an hour past midnight and the cloud closes in again so I decide to head home finally. As I drive back, I can’t help wondering if I am missing an opportunity, have the clouds finally disappeared? An hour later I am at home. The sky is clear here so I wonder whether I would get better photos from my garden. I set up and take a few pictures but it is obvious (once again) that I am not going to get any finely detailed Milky Way pictures here. I pack up and go to bed. 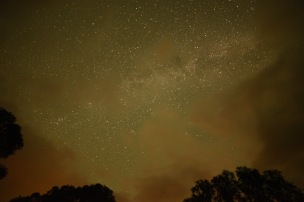 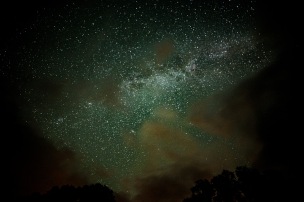 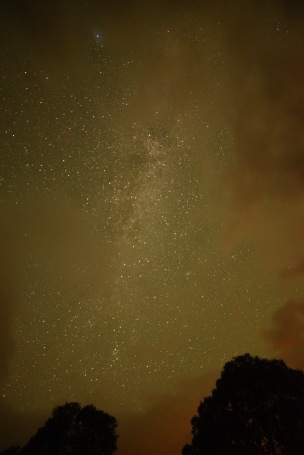 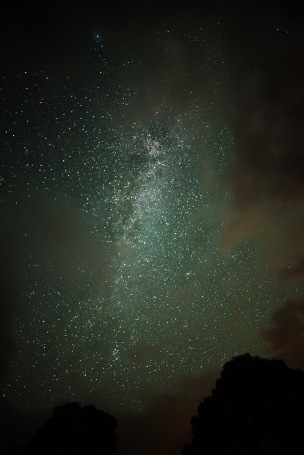 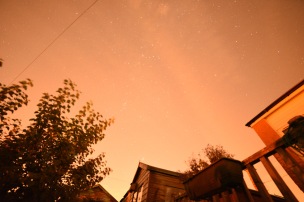 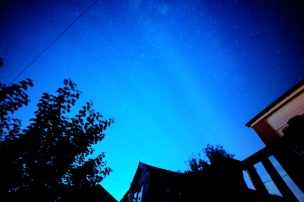 2 thoughts on “The Milky Way Trials”

This site uses Akismet to reduce spam. Learn how your comment data is processed.